Buffalo Era in the Cypress Hills

You are here: Home1 / Buffalo Era in the Cypress Hills

Buffalo were of the utmost importance to Indian tribes and all plains-dwelling Metis.

Through the 1850s as buffalo numbers declined, the Metis followed them farther and farther west from their Red River Settlement in southern Manitoba; eventually they had to winter-over on the plains when formerly they would have returned to Red River. And so it was that in the 1870s Metis entered the Cypress Hills in southwest Saskatchewan and settled in coulees along Battle Creek near Fort Walsh.

A few families remained there when the buffalo were gone. They subsisted by trapping, hunting, collecting buffalo bones for sale, carting and working for ranchers Today the coulees where they lived still carry their names, for example, Robinson and Whitford Coulees.

Native people relied completely on the buffalo and faced starvation as the population declined.  Who would have dreamed that could happen when as late as 1865 traders and trappers recorded seeing huge herds that stretched from horizon to horizon. By 1878 remnants of the once great herds were congregated around Fort Walsh and vicinity in the Cypress Hills, in the Milk River and farther south. By 1879 even those in the Cypress Hills were gone; the last one was reportedly shot in 1880 in the vicinity of Fort Walsh.

The Canadian Government wanted the Indians to settle on reservations and with the buffalo gone it withheld food supplies to force them to comply.

Thousands of starving Indians gathered at Fort Walsh to receive rations the NWMP (North West Mounted Police) were giving to those who agreed to sign treaties and move to reservations.

When the Chiefs could no longer stand to see their people crying and dying from hunger they signed the treaties and were moved to reservations in northern parts of the province.

In 1882 orders had been issued to abandon Fort Walsh. With the Indians gone the buildings were dismantled in 1883 and moved to Maple Creek, Sask. forty miles to the northeast.

This fascinating article is reprinted from “Canadian Cattleman”, September 1948.

A collection of historical photographs from the Buffalo era.

Sitting Bull and the Mounties – HistoryNet 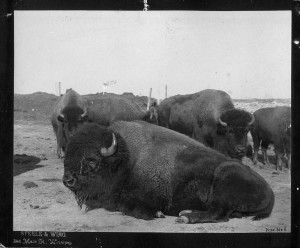