You are here: Home1 / Irrigation on the Southern Slope of the Cypress Hills2 / Project planning

In addition to the administration of the water license system as provided for in the North West Irrigation Act, the Department of the Interior through to 1930 also undertook the planning of irrigation projects. The planning of irrigation development in the Cypress Hills began as early as 1895. In that year J. S. Dennis, Chief Inspector of Surveys, in his report on irrigation observed that there were a number of small streams heading in the Cypress Hills which flowed north, south and east. Storage reservoirs were required, however, if irrigation was to be expand beyond the use of these rivers to reclaim small areas in the immediate vicinity of the point of diversion. Surveys to identify the locations of reservoirs at least for the northern slope were undertaken in 1902 by C.H. Ellacott. 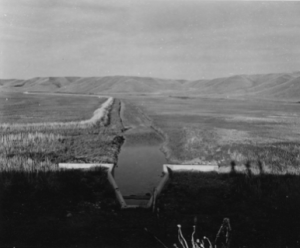 Potential reservoir sites on the south slope of the Cypress Hills were first noted by Department of Interior engineer Ralph Burley. His report of his field work in the area during the summer of 1908 noted that Cypress Lake was a fine natural reservoir. He recommended that it be surveyed to demonstrate the possibility for its use as a water supply for Battle Creek and the Frenchman River. He also suggested that a survey could reveal the existence of several small reservoir sites to the north and west of this lake which could be used as feeders. He regarded these as less necessary, however, because the water they stored would ultimately reach Cypress Lake in any case. Burley also noted that the Middle Creek tributary of Lodge Creek offered considerable potential for reservoir development which could meet the needs of the majority of the irrigation schemes along this creek.

The survey of Cypress Lake as recommended was carried out in 1913. The reasons for action at this time included the lack of an adequate water supply during the entire irrigation season. The run-off took place in the early spring leaving an insufficient water supply for the rest of the year. The second reason was the 1909 treaty between Canada and the United States which regulated the use of the tributaries of the St. Mary and Milk River which included all the south flowing rivers in the Cypress Hills. The restrictions on the use of the water north of the international boundary meant that there was a need to conserve to the fullest extent possible, all the water supply in the region. A comprehensive plan to fully deal with the water storage issue on the southern slope was thus required. The Department of the Interior acknowledged that it would be beyond the means of the individual irrigators.

The promised survey was undertaken by N.M. Sutherland in May 1913. The objective was to design a network of canals and dams which would impound all the waters of Oxarat and Sucker Creeks, the flood waters of Battle, Belanger and Davis Creek in Cypress Lake. To the west of Cypress Lake a canal was located from Battle Creek to Cypress Lake along with a canal to return the water in the reservoir to Battle Creek. To the east of Cypress Lake, canals were located to divert the water of Davis Creek into Belanger Creek which was in turn to be diverted into Cypress Lake. The water in Cypress Lake was to be retained by dams at either end which would control the release of water into Battle Creek to the west and the Frenchman River to the east. The field work also included collecting data on stream flows of Oxarat, Davis and Belanger Creeks to determine the amount of water available for storage in the new reservoir.

Sutherland estimated that there were about 24,000 acres of land which could be irrigated along the Frenchman River and that there were about 7,000 acres which could be irrigated along Battle Creek of which 12,000 were currently being used for that purpose. To determine the potential of the Cypress Lake Reservoir to meet this need, Sutherland assumed that the water of two wet years such as 1912 could be impounded and that this supply could meet the need for irrigation for two average dry years. He concluded that although the reservoir may not be able to serve the total area of irrigable land during exceptional years, it would be sufficient for the land presently irrigated.