You are here: Home1 / Irrigation on the Southern Slope of the Cypress Hills2 / Adams and Cypress Lake Reservoirs

Construction activities related to Battle Creek began with the creation of the Adams Lake Reservoir. This reservoir was located at the headwaters of Battle Creek in the Cypress Hills Forest Reserve No. 2 established in 1911. The purpose of this reservoir was to replenish the flow of Battle Creek during June, July and August during which time the creek could go dry. During 1931 it would have been necessary to release water by May 1 and continue to supply water during the balance of the irrigation season. Irrigation on Battle Creek could move on a permanent basis from spring irrigation to having a water supply throughout the irrigation season. The capacity of the proposed reservoir was 1,800 acre feet which could store the estimated 1,620 acre feet available on an annual basis from the drainage area tributary to the reservoir. It was constructed in 1936 at an estimated cost of the $7,490 by F.A. Mamoser & Son of Shaunavon. 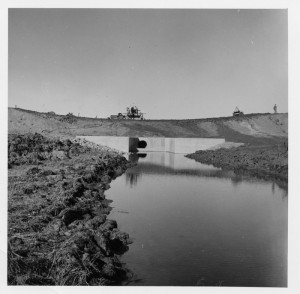 The Adams and Cypress Lake Reservoirs permitted the development of the Vidora, Consul and Nashlyn Irrigation Projects on Battle Creek. The Vidora project was the successor to the Robsart-Vidora irrigation project first proposed in the early 1920s. The Consul project originally referred to as the Richardson Project and then the Richardson McKinnon Project was located north and east of the town of Consul was developed by the PFRA. In 1937 it purchased the land originally owned by Mrs. L.E. Richardson and James McKinnon who had received irrigation licenses 4 and 5 respectively. The PFRA’s settlement plan was interrupted by World War II but by 1946 2,900 acres were ready for settlement. The Nashlyn project located close to the American border was originally developed by Earl Nash and Robert Stirling.