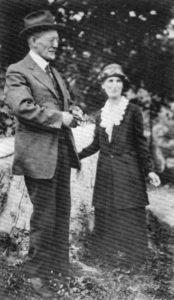 Cecil came to Canada from London, England, as a young man. He and his brother, Alfred, came to work on the farms and ranches owned by Sir John Lister Kaye, later known as the “76 Ranch”. I believe they called the farm at Balgonie the Belle Farm. My mother used to sing us a ditty, “Belle horses, Belle horses, what time of day? It is six by the clock, a bright morning in May.” It was at Balgonie that he met Letitia Molineux who was teaching school there. They were married in Qu’Appelle, July 8, 1893.

While working on the farms Cecil had gotten to Maple Creek and had chosen a homestead in the Cypress Hills at Four Mile Coulee. He started to build his house on February 3, 1892, and that spring he assisted Uncle Johnny English with his, so when he brought his bride, Letitia, in 1893 the house was ready for her.

They lived in the Four Mile Coulee until the early fall of 1900 when they moved to Maple Creek and he went into partnership with Fred King in the butcher business. Cecil Delves did most of the buying of beef. He rode and drove all over the country looking for fat beef.

In 1903 they decided to start a shop in Swift Current, so they moved the family there. There were three girls and one boy: Grace, Mollie, Alice and Bert.

In 1918 my mother and father and youngest sister, Alice, moved to BC. They lived on Vancouver Island a few years and then went to Seattle. My father died October 23, 1933; my mother died at Port Alberni, September 17, 1955.

When my folks first lived at Four Mile Coulee there was quite a settlement along the creek: Jack Cheeseman at what was Howard Hassetts, Sam Hungerford at Leslies; Uncle Johnny English on what is now Forest Reserve, Channels, Serible, Waldie, Billie Adams, and Ted Harris. “All were bachelors but for the latter. When Ted Harris brought his wife and family out from England, Mrs. Delves was thrilled to have another woman in the area.”1