Source: Laura Parsonage in From Sage to Timber history book 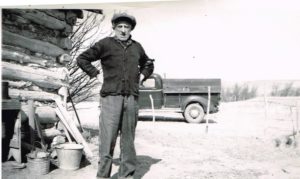 Harry Dore came to Manitoba from England. Graham Parsonage’s relatives, the Blackburns, brought him to this area. He built a little log house down Battle Creek about three miles from the Everett Parsonage Ranch.

I was only in his shack once. It looked so neat and clean I remember thinking to myself that as clean as the floor was he must have really used the scrub brush.

Harry had been secretary to a Conservative Party while still in England. After coming to this area he was secretary and trustee for the Merryflat School for many years.

Now and again he would walk up to Uncle Fred Parsonage’s log shack to visit. One never knew he was coming until he was right there as he made no noise when walking. In the summertime he wore running shoes.

It seems he was a great hand to cook up rice, but he washed it so many times there was no taste left in it. He never had a supply of wood on hand, but went up and down Battle Creek to gather up “squaw bush”. He used a lot of coal which Carl Spangler hauled in for him every fall.

Harry had a violent temper; his cattle and horses suffered from this. They were never used too well.

The neighbours helped Harry gather his beef to sell in the fall. Harry would get so worked up over the whole deal he would start grinding his teeth.

Harry brought his mother over from England in the year of 1905. She was a mental case. Uncle Fred Parsonage lived a mile up the creek from Harry, and now and again Mrs. Dore would walk up to Uncle’s to visit him. She always carried a .22 rifle or a butcher knife. Lots of times while visiting Uncle she would show him how she could shoot the knots in the logs of his house. Graham says Uncle Fred paid no attention to her.

When Graham was born Mrs. Dore walked up to visit Grandma Parsonage and gave Grandma a nice washcloth for the baby. Grandma kept the washcloth for many many years and then gave it to me.

Finally Mrs. Dore got out of hand altogether so Harry decided she’d best be taken back to England. Johnny White took her back.

Harry Dore died October 18, 1950 at the age of 70 from heart trouble. There was never an heir found for Harry’s estate; the government got it all.