Source: Our Side of the Hills history book

H.J. Badger and Alice Luse were married in Iowa in the mid-1880s. His name was Hannibal Joseph, but legend has it that only his wife ever dared to address him as Hannibal. Generally he was known as “Badger” or “H.J.” 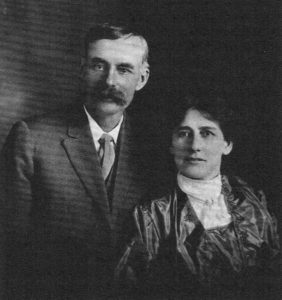 Hannibal and Alice Badger / Photo: Our Side of the Hills

Because of the ever-present desire for free land, the Badgers left Iowa in 1889, travelling in a classical covered-wagon style. The Badger family settled near Lohman, Montana, not far from Chinook.

In 1904, the lure of open range and free land caused Badger to move yet again, this time into Canada, but still in the Milk River drainage system. Since the area was still being administered as a territory, he applied to the Dominion Government and received a land grant of 640 acres encompassing the junction of Battle Creek and “Lost Dutchman Coulee” (later known as Porcupine Coulee). It was here that he and Alice brought their family, and established what would come to be known as the Badger Ranch. Horse power was still a prime requisite for the many settlers coming into the country, so they concentrated on building a horse herd and later went into cattle. To be sure of a supply of fodder, they developed a system of flood irrigation, which was effective.