Source: Written by Joan Parsonage with information from From Sage to Timber  and Merryflat and District history books. All stories by Leo Gaff.

Dennis Leo (Bub) Gaff was born in Norton County, Kansas in 1876 to James A. (Dad) Gaff and Etta Gettys. He had two sisters, Carrie and Etta (1882-1980), also born in Kansas. When settlers began to get too close and began plowing the land, Bub’s dad moved his family to Nebraska where Bub’s mother died shortly thereafter; Bub was about seven years old. He went to live with his grandparents, the Grays, back in Kansas and he went to school there for quite a few years. When going to school Bub jumped off the schoolhouse in a dare and broke his leg which never healed for years. The Doc told him he would never live to be 20 as he had a siege of bleeding from the nose and ears for months at a time and was sick until he was about 15 years old. 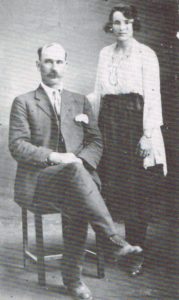 When Bub was 17 he was out herding cattle with his cousin when they spotted a yearling with a muzzle on and decided to take it off. He took down his rope and caught the yearling, but in doing so he caught his thumb and fingers in the rope. He lost his thumb then. It was about 10 miles from the ranch so he lit out for home. When passing a neighbour’s house the neighbour called to ask him what his hurry was. Bub just held up his bloody hand and kept on going. The neighbour jumped on a horse and followed him, thinking he would find him at the first gate, but Bub didn’t get off his horse to open gates. He kept on going until he got home where they fixed up his hand the best they could and took him to the doctor the next day. The doctor was 40 miles away. Bub was in the hospital a few weeks as they had to remove two of his fingers.

Bub’s dad married Myra Shafer and the family grew to include Myra (1886-1971), Frances (1887-1976), Alla (?-1941), Jimmy, Essie (1895-1982), nine month old Eva (1895-1976). The family’s cattle herd grew too large for the land they owned, and cattle and horse stealing was getting bad. About the same time Bub’s uncle, Walter Shafer, who was already in Canada, was telling them of the wonderful country in the Pincher Creek, Alberta area; the family decided they would move to Canada. Dad Gaff sold his ranch and his cattle for gold and he had an auction sale that fall.

In the spring of 1896 just before the family left for Canada, Dad Gaff sent 18 year old Bub, with his saddle horse, pack horse, bed and food to Salt Lake City, Utah, to get the horses he had left there with two of his friends. Bub was to meet the family at his Uncle Charlie Gettys’ place in Wyoming. Bub never lost one horse and arrived at Gettys just a few days after the rest of his family did.

Though they had planned on going to Pincher Creek, Alberta, when they arrived at Ten Mile Detachment on Battle Creek where there was good water, good grass and the Cypress Hills not far away, they decided to settle near there.

Unlike most of the other cowboys of that age Bub was given a good education.  He was not willing to let it drop when he came to this new country. He bought a typewriter, certainly the first one south of the main line of the CPR and took a correspondence typing and shorthand course. Much to the amazement and the amusement of his cowboy friends he learned to master both the machine and the “pot hook and hangers” of shorthand. Later he took a job at Vancouver with the newspaper, the old “Vancouver World”, but within a year he was back on the prairies again.1

This country was still free range and the cattle they purchased increased in numbers quite fast. By the summer of 1906 they had two places, the home place on Battle Creek five miles east of the Ten Mile NWMP Detachment and Bub’s homestead three miles south of old Fort Walsh.

The family knew sadness. Bub lost his half-brother, Jimmy, age 8, when he was kicked behind the ear by a horse and died instantly; his step-mother, Myra, from shock, lost baby Ellis at birth. Then a year later, not yet over the shock she died when little Madge was born. Five year old Madge caught her clothes on fire and died from burns and shock in Maple Creek Hospital.

Bub and his dad built an irrigation project with teams and scrapers in 1897 and 1898. To build four miles of irrigation ditch and numerous dikes was truly a great undertaking. They secured Number One water right on Battle Creek and Bub’s grandson and great-grandson use the same project this year of 2016.

In 1921 Bub married Vienna May Pettyjohn who he always called Honey. That is how they became known to everyone, Bub and Honey. Bub’s partnership with his dad ended and in 1923 Bub and Honey moved up to the Flapjack Ranch from the ranch on Battle Creek. There they raised six children: Neva, Leo, Gale, Nile, Esme and Pal; all of whom called their mother, Honey.

In 1925 Bub purchased the Henry Marshall Place; that is where his son, Leo, would eventually live. They built up one of the finest herds of cattle in the country and anyone who knew Bub knew of his cattle-selling shrewdness. He made several trips to England with boat-loads of live cattle to test out the markets there. Many neighbors would send their cattle along to make up a load. He told about the big steers getting sea sick and not eating for five or six days, how they would vomit just like a human. These cattle had to be tied separately and fed and watered every day.

Many a trip he made to Chicago with cattle by train. On one trip he was gone for so long Honey figured some gangsters had rapped him on the head. Her fears were not groundless because an attempt had been made to rob him. Bub and his uncle sold the cattle for a good price and Bub took in all the sights. He decked himself out in a new suit known as a swallow-tail and, as was fitting to a man of his newly-acquired wealth, he returned on a First Class ticket. His uncle, being a man of more simple tastes, returned third class. Bub took in all the dances and concerts on the ship and in general was quite the life of the party. His uncle started up to visit him one time, but the steward turned him back. A few days later Bub saw his uncle who was still pretty sore about it. Just to make matters worse, Bub rubbed it in a little and said, “We don’t want you fellows bothering us up there.” Uncle, being a firm believer in everyone being equal, just about blew up. “You and your damned monkey suit, that’s all you got that I haven’t.”2

When you have cattle you must have horses and the old cowboys who used to ride with Bub on the roundups told that he had the finest string of horses in the country and was a superb rider. Some of his horses were trained to jump gates. One horse by the name of Kelly would squat down as you would start to throw the saddle on.

Getting their kids to school was always a problem for Bub and Honey as they lived seven miles from the nearest school at Merryflat and there were virtually no roads. The kids took correspondence courses up to grade eight. A girl was hired to teach them, however it was a chore to keep a teacher as it would not be long before the teacher would be married. The first was Muriel Howlett who later married Steve Schafer. Next her sister, Marjorie, who did not last long once Ernest Pettyjohn got his eye on her, and Agnes Kelly who later became Mrs. Bill Parr. Later, to get to school they rode, boarded out, lived in a little log shack, and stayed in Maple Creek.

When the old Maple Creek Hospital burned down in 1945, Bub, along with nine other patients, suffocated before they could be rescued. Honey continued to live at the Flapjack Place with her family close by. Years later she retired to Brooks, Alberta, where she died on May 26th, 1980 at the age of 75.