Edward McKay was a member of the extensive McKay family that had been associated with the Hudson’s Bay Company for many years. Edward had spent years in the Qu’Appelle district, where he and his wife, Caroline Cook, had raised a large family. By the late 1860s and early 1870s Edward had been a regular visitor to the Cypress Hills. He worked as a provisioner for the Hudson’s Bay Company, trading with Indians to secure supplies of pemmican needed by the Company to carry on their business activities. The Company required huge amounts of pemmican, and other staples, to feed their many employees. Besides fine furs and other hides and pelts, the Company purchased these supplies from Native people, exchanging its vast array of European trade goods for the local products it required. Edward would set up shop each fall, and return to Fort Qu’Appelle in the spring.

In 1872 Edward moved with his family, including grown sons with their families, to the Cypress Hills permanently. He is likely the Cypress Hills’ first rancher, as he had a small herd of beef cattle, some of which he also milked, in addition to his draught animals and saddle horses. The McKays grew a large garden, and also harvested small-scale plots of oats and other cereals. They also hunted game, and gathered local fruits and other plants. They continued to trade with the Indian bands who visited the Cypress Hills.

Edward and his family were resident here when the Cypress Hills Massacre of June 1, 1873, occurred. Edward had been witness to the increasing illegal activity by American-based traders and hide-hunters in this region, and he reported on it regularly. After the Massacre he continued to implore the Dominion government to do something to stem the increasing violence and unrest which attended the American trade. People were being killed on a regular basis, and Hudson’s Bay Company business interests were also suffering as a result of this ever-increasing American competition. 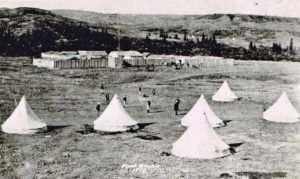 Edward got his wish. In 1875 the N.W.M.P. constructed Fort Walsh immediately adjacent to the McKay family’s place. Edward took the perhaps uncomfortably close proximity of the Mounties in his stride. He sold cream and butter, and other commodities, to the Force. He took on provisioning contracts with the Mounties, supplying buffalo meat to them while the herds lasted. He and his sons contracted to haul mail, interpret, and scout for them over the years. Two of his daughters married N.W.M.P. Edward also ran a small store for a time in the village that grew up just to the north of the new fort.

The McKay family remained in the area after Fort Walsh closed in 1883, but in time they moved on, many going to Medicine Hat. The McKay family would continue its relationship with the Cypress Hills, however, and many members of the extended family can still be found in the region. Many prominent ranching families can trace their lineage back to the McKays of Battle Creek.