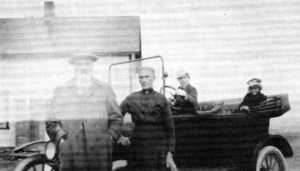 Mr. & Mrs. McRae and their children / Photo: From Sage to Timber

Bill was born while they were still in Ontario. Alec moved to Manitoba driving, but Catherine and family crossed Lake Huron, took the train, and then came down the Red River in a steamboat to Fort Garry. While living at Dauphin Hec was born in 1890.

In 1902 Alec shipped their belongings by rail to Maple Creek. Bill had come west in 1900 with his sister Kate and husband Jim McKinnon. The family now consisted of Bill, Kate, Hec, Lizzie, Emma, Jack and Barb. The family and belongings came out in two wagons, spending the first night at Balls. Jim McKinnon and Jack drove out the cattle. The first winter was spent in a shack in the Pea Vine Coulee, (some say Flapjack Coulee) near Fort Walsh.

Next year Alec built in the Alkali which later belonged to Lindners. In 1903 Hec helped J.M. Spangler drive the milk cow as far as Parsonages. Hec, Emma and Barb attended the Ten Mile School. In 1906 their teacher was Lisa Hargraves from Medicine Hat.

In 1906 Jack, Sam Crossen and Charlie McFarlane drove cattle, oxen and horses from Richardson’s near Consul to sell at North Battleford. About 90 miles north of Saskatchewan Landing Jack Allen and Percy McLaughlin met up with them and had dinner. They were going to Percy’s homestead.  The three riders were killed by lightning on August 17th and lay there until Jack Allen found them on his way back, approximately 14 days later. He reported it to the police at Swift Current, a two day trip. Ike Stirling brought word of their death to McRaes and Bill went to the scene. They were buried there and next year the bodies were brought to Maple Creek for burial. 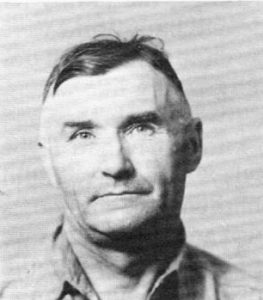 In 1909 Hec overtook John Boone, the mailman, at the top of the Four Mile Coulee resting his team. He offered Hec a drink which Hec accepted still sitting on his saddle horse. In returning the bottle to John his horse threw his head and broke the bottle neck. They couldn’t waste the whiskey so drank it before going on.

The fall of 1911 had been wet so haying was held up. Hec offered to haul mail for John Parsonage for several trips so they could hay on the Benson Place. He went to Coulee and Battle Creek Post Offices from Maple Creek.

In 1913 the family left the Alkali and settled on the Egg Lake Place.

Hec had three scrub race horses. Frank Page and Johnnie Laveille rode them for him in races at Govenlock, Consul, Vidora and Maple Creek winning most of the time.

In 1916 Monty Wylie and Hec were in British Columbia around Burns Lake looking for ranching country. Doug MacKinnon had told them this was ideal ranching country. After paddling a canoe for 200 miles they gave up and went to Vancouver. They joined up in August 31 and the next January 8 were transferred to England before going to France. Hec left first then Monty. They did not see each other until the end of the war, arriving back in Wales and coming home on the same boat as General McNaughton. Hec took his discharge in Vancouver then visited Seattle, San Francisco, Salt Lake City, Butte and Havre before returning home.

Bill and Cliff McKinnon and Charlie Oakes were haying at Whitewood in 1919. Dad (Alec) dropped dead walking from the house to the stable. Mother (Catherine) stayed on with Bill helping her. She was visiting Kate January 29th 1939 and suddenly passed away.

Bill married (Edna Brown) in 1937.  In 1947 he sold to the government (became Merryflat Grazing Co-op) and left for British Columbia. He died November 15, 1963 leaving his wife and four children.

Hec fired the steam engine for Jess Anderson for three years. One fall they were threshing at Scarlett’s. Jess, Andy Wilson and Hec had been in Govenlock playing poker and drinking. It was time to go to work, but Jess said Hec wanted to quit because he was winning. Still arguing they left. Part way there they stopped to continue the game, but as soon as the two stepped out Hec drove off for Scarlett’s. The two walked back to Govenlock and got a ride out. After a short sleep peace was restored and the work resumed. Hec also worked for Eva Gaff.

Hec sold Raleigh products from Shaunavon south from 1945 to 1953.I am sure many of his customers remember the lemonade drink that everyone referred to as Hector’s Nectar.

From 1956 to 1963 he trapped live beaver (from Battle Creek); they were shipped to Weaver Beaver Association at Salt Lake City.

Sister Em married Les Proud in 1908. They lived in Maple Creek and Les worked for John Redman in the printing office. He enlisted in 1914 and was in the war until 1918. During these years Em ran a boarding house in Vidora then moved to Regina. After she had the flu in 1918 she helped her doctor with patients in their home. One of these families was the Metz family, famous hockey player. On his return from the war Les started a vulcanizing shop in Regina. Les and Em had two children.

Liz married Dave Findlay from Fleming, Sask. He was a station agent for the CPR. After his retirement they moved to West Vancouver.