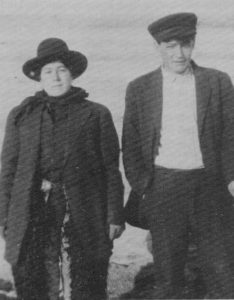 Georglina and Barney Montour / Photo: From Sage to Timber

Barney Montour was born in Lewistown, Montana in 1887. He moved to Canada in 1898 with his parents, John and Christine. His mother died the same year and he was then raised by his grandparents, Mr. And Mrs. Abraham Montour. He had one sister who died at the age of two. His father remarried and had six more children: a girl who died in infancy, Joe (died at 13), Albert (died at five), Agnes, Mary and Irene.

As a young lad, Barney worked for ranchers A.P. Day and Tony Day, then later worked on the Fort Walsh Ranch for Wood and Anderson, as did his wife. From here he worked as a teamster for the headquarters of Forestry Branch at the West Block of the Cypress Hills. Afterwards he rented a farm from Walter Boyd for about three years and then worked for ranchers, Lindner Brothers and Doc Dixon. After the passing of his father-in-law, Roger LeBarge, he bought his homestead and ran cattle and horses. At this time he also worked as an assistant ranger in the summer months and as a RCMP stock detective from 1932 until his retirement in 1950. Barney was very good at blacksmithing, carpentry, breaking and shoeing horses so was never without work during the depression.

As a note of interest Barney also worked for the RCMP at Fort Walsh and along with a log builder from Regina built all the log buildings at Fort Walsh. They replaced the buildings in their original spots which were determined by some of the old NWMP who worked on locations since 1930.

Barney married Georglina LeBarge in March 1910. Georglina passed away in 1926 and Barney in 1955. They had four children: Lloyd, Muriel, Francis (Sonny), and Rosella. After the passing of their mother the children went to live with grandparents Roger and Madeline LeBarge. Up until this time the three eldest children attended school at Merryflat and later lived in Maple Creek to attend school. Rosella also attended school at Merryflat, boarding at Mr. and Mrs. Fred Anderson’s, and later in Medicine Hat. She completed her Grade 12 by correspondence.

Lloyd (1911-1971), at the age of 14, worked for John Parsonage and Lindners. He joined the Canadian Army in the fall of 1939, 16/22 Saskatchewan Horse, and moved 23 times while stationed in Canada, from Vancouver Island to Halifax. He saw action overseas in France, Germany, Holland, and Belgium. He came home in 1946. He worked as a special constable for the RCMP at Fort Walsh, then at local ranches in the Cypress Hills.

Sonny (1919-1956) joined the army in 1940, the Regina Rifles, and was stationed at Dundurn, Saskatchewan, after basic training. He went overseas, was wounded in 1944 and spent three months in the hospital in Belgium. While overseas in the army he received a medal for bravery. Sonny returned home in 1946 and bought a place in McBride, British Columbia, later selling and moving back home to work for Lindner Brothers. He later moved to Peace River, British Columbia. Sonny married Ruth Schilling in 1949 and they had three children.

Muriel worked in Calgary, later moving to Vancouver to take a machinist course during the war. She worked in a machine shop until returning home to look after Grandma LeBarge. Muriel married Herb Widmer in 1953 and they lived in Maple Creek until 1962 when they retired to Medicine Hat, Alberta.