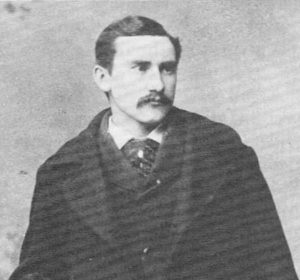 Sergeant David (Pry) Paterson  was born in 1855 and passed away in 1916. He enlisted in the NWMP around 1875 and was discharged in 1908. He served at Fort Macleod, Fort Walsh, Swift Current, Regina and finally at Maple Creek. Louis Cobelle, scout at Fort Walsh and Ten Mile Detachments and Paul Laveille, scout at Fort Walsh; these two men worked under Sgt. Pry Paterson, Chief of the NWMP Scouts.1

In 1884 David married Mary Almeda Baum. Mary was born in Iowa; she, along with her aunt or half-sister from Waterloo, Iowa came to the Great West to seek fame and fortune and landed up at Maple Creek. She was employed at the Commercial Hotel in Maple Creek when she met David. When David was on detachment at Swift Current and Maple Creek, Mary gave birth to three sons: John in 1885, George in 1887 and Charlie in 1889. Harry was born in the old log house at the Ten Mile Detachment in 1892. Arthur was born in 1897 and May in 1901 at Maple Creek.

When David retired from the force in 1908 he and his wife continued to live in Maple Creek. [Their house still looks beautiful on Jasper Street in this year of 2016].

He had purchased the Ten Mile Detachment along Battle Creek and it was there he set up his son, George, to begin his ranching career. 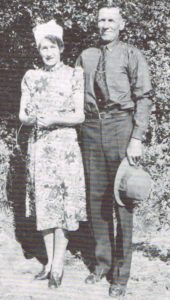 George married Frances Gaff in October, 1909 and they had three children, Jimmy, Roy and Meda.

George’s granddaughter, Dixie Wilson Black, says her mom, Meda, tells of the hardworking man that her dad was in his younger years when Meda was growing up. How he put in long hard hours fixing on the irrigation project he developed that included a flume to take water across Battle Creek to his hay land. (His irrigation project is still in use this year of 2016 by Carl Parsonage family). He used his team of horses and a little tumblebug scraper to dig ditches; the scraper was quite a new and wonderful piece of equipment at that time.

Meda says that she had the “best parents”; they made everything so much fun when they were growing up, always taking them places and doing fun things together.

Some of Dixie’s memories of her grandfather, George,  From Sage to Timber history book.

“George” was what we kids called him. I remember when we were young he didn’t want us to call him Grandpa. He said, “Call me ‘old so and so…’ but don’t call me Grandpa” so we never did. This was also partly due to Phil Lindner calling our grandma “Ma Pat” which everyone began to call her. When we were little we thought that was her name. To us it was always “Ma Pat and George.”

“George was well-known for miles around as he loved people and a party and for everyone to have a good time. Money meant nothing to him. He had been known to go down a street in Havre, Montana, reach into his pocket and put a crumpled twenty dollar bill into the hand of a stranger as he was passing by, usually a lady or child. He did this many times depending on whatever money he reached first in his pocket.

“George was always a slender, healthy, active man for his age and always on the go. He was kind of comparable to a bantam rooster at times. He got into many jackpots, too, from having a few too many and getting too cocky. One of these episodes was around 1957 when he was 73 years old, down in Havre, Montana. He got into a wrestling match with a professional wrestler. No doubt George provoked it all as I doubt the fellow would otherwise take advantage of a man his age. Anyhow, George came home mad, sore, all bruised up and had a few broken ribs “from the scissor-lock this big son of a b…. had on me with his legs.”

“The year they sold the ranch George went to Havre, Montana, met some “real good guys” (a whole Air Force crew from Texas no less) and proceeded to throw a party for them all. He bought two floors of rooms for the night and Lord knows how much booze! When he finally played out and wanted some sleep the rooms were all full so he bought another one. Before he made it to this room it became occupied. Altogether this happened three times. Finally, needing some sleep badly and as impulsive as he was, he hired a private pilot and his airplane and they flew to Medicine Hat where George got a room and rested up. Back to Havre they flew and proceeded again from where he’d left off. When he came home he was flat broke and ended up in the hospital.

“These stories are the ones that people remember the most as they took place in George’s later years. We can all see the humor in them now, but at the time his family didn’t know whether to laugh or cry.

“Mom remembers when they were kids in the 1920s George would come in, eat dinner and afterwards roll on the ground outside with severe stomach pain. He had gone to local doctors about it, but they didn’t seem to know the cause or the cure. “It was in the back of his mind that maybe he had cancer,” Mom says, “as that is what his mother died from.” One day, seeing George’s agony, Phil Lindner told him he should go to “the best doctors in the world,” in Rochester, Minnesota. Phil told George that many great things in the medical field had been done by these doctors who started the Mayo Clinic. Ready to try anything, George, Ma Pat, and Eva Gaff left for Rochester. It was discovered that George had a gastric ulcer and he was operated on by Charles Mayo. Anyway George “had a stomach of iron” after that, relates Mom.

“In the 1940s Ma Pat and George went to Medicine Hat for a shopping trip and stayed in the old Assiniboia Hotel on the second floor. In the middle of the night the fire alarm went and there was lots of smoke and they couldn’t get down the stairway. Ma Pat started throwing all their stuff in the suitcases including her purse and some dry cleaning she had picked up. She just put her long coat over her pajamas and George pulled on his pants. Knowing the only way out was the window they began tying bed sheets together to lower down on. In her haste Ma Pat grabbed two corners of the same sheet and tied them together. George disgustedly told her to let him do that job. He tied one end to the bed and Ma Pat slid down using the sheets like a rope through the open window. Thinking that George would throw their suitcases down next he surprised her and came down himself without any belongings. Ma Pat was disgusted then and he told her not to worry as it probably was just a little fire and they would be able to go back to their room before long. As it turned out the hotel burned down. It was scary for them as they were in a narrow kind of an alleyway between the hotel and another building and could not get out until firemen rescued them. As it turned out George had left his wallet and false teeth on the dresser, but what bothered him more was to lose a new bottle of rye. Ma Pat felt bad about losing her purse, but what really bothered her was a big gallon jar of sweet pickles she had just bought. Luckily everyone got out of the hotel safely except for two dogs whose owners were away at the time.

“Mom always had a birthday party for George every March 31st as long as I can remember. Usually attending this celebration were Ma Pat and George, Eva Gaff and Steve Schafer, bachelors Johnnie White and big Willie Covlin and whoever else was around at this time. A lot of times the roads were bad in the spring and it was a challenge to come. Sometimes they would come with a tractor and wagon. We always had a big turkey dinner, card games, boxes of chocolates, lots of laughs and took pictures. George always wanted one picture of him, taken alone, because he said that this would be his last birthday. Funny thing is we have quite a few years of pictures of him on his last birthday.” 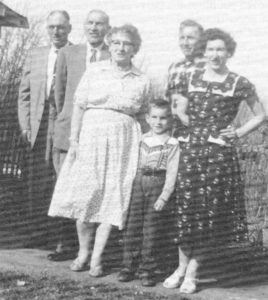 When George and Ma Pat sold the ranch to sons Jimmy and Roy in the 1950s Jimmy remained on the home ranch and Roy moved further south to the Jahn Ranch they had purchased.  Ma Pat moved down the creek to her daughter, Meda, and son-in-law Lyle Wilson’s place where she lived in her own house.

George lived in his trailer home next to Jimmy’s house. In November of 1960 George passed away in the Swift Current Hospital at the age of 73 from a penicillin reaction following prostate surgery.