Source: Pete Reesor in Homesteading in the Consul District

The morning of March 20th, 1902 I left the old home farm near Markham, Ontario and headed west. I spent the summer working on a farm in the Muskoka area. 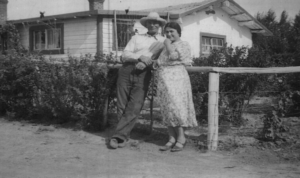 I came west on a harvest excursion in the fall, working in Manitoba for harvest and threshing, coming on to Maple Creek in November. I went to Fort Walsh where I worked on the Wood and Anderson Ranch for two years.

In the fall of 1904 I homesteaded near Fort Walsh, living there two winters and working in the south country, as it was then called, now known as Consul, for the summers.

In the winter of 1905-06 I made application for irrigation land where we are still residing. The winters of 1906-07 I worked in Montana, there being no work in this country. I relinquished my homestead in the Hills and filed on a homestead in the south country. 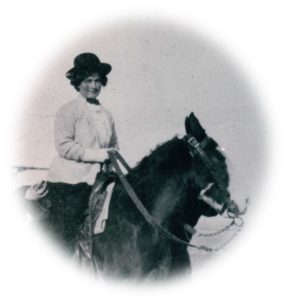 We had many interesting experiences in those early days. I remember in June 1906 I was working on the Jim McKinnon Ranch (on Battle Creek south) with Jack MacKinnon, a nephew of Jim’s. The McKinnons had gone to Maple Creek with a team and wagon for supplies. While they were gone there was a cloudburst in the Hills, swelling the creeks to their capacity. When they arrived home there was ten feet of water running in Battle Creek. Jack and I were obliged to build a raft to bring them across the creek. They turned the team loose and left the wagon and we brought the family and their supplies over. That same fall I helped drive four hundred head of cattle across country to Gull Lake. It took us five days to make the trip and we saw neither fence nor person during the trip… 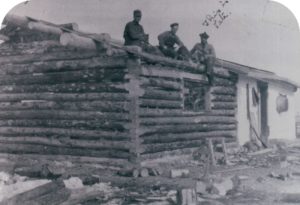 Our first country store was built by Mr. Peachey near the McKinnon Ranch in the spring of 1910. Later on, Lou Richardson built another store two miles northwest of the Peachey store. In the fall of 1912 Dave Johnson built a store about one half mile west of McKinnons. There was also a bank and post office built at the same place which was later moved to Consul.

The Peachey Family
Scroll to top