The founder of the outfit, the late Walter Ross, was born in 1855 at St. Jean Chrysostome, Quebec.  He went to Texas where he was engaged in the construction of the railroad being built into San Antonio. On his return to Canada, he continued the work of railroad construction, making his home at Rat Portage now known as Kenora, Ontario.  This was the birthplace of his son, George, in 1891. 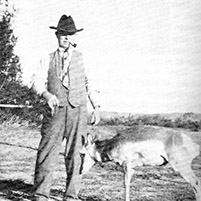 In 1885, Walter Ross and some railway construction co-workers formed the Brown Ranching Company Ltd.  They purchased four hundred head of Shorthorn heifers and shipped them by boat to Fort William, Ontario, then on the Canadian Pacific Railway to Medicine Hat.  They were then trailed to the ranch headquarters eight miles down the St. Mary’s River from what is now Cardston, Alberta.  The cattle were branded BR on the right ribs and Ox Yoke Bar on the right hip and rib.  In 1900, Walter Ross moved his family west from Rat Portage.  Sometime in the 1890’s, the company obtained a twenty-four section government lease on Milk River Ridge.

In 1901, the Brown Ranching Company split partnership, with Tom Moffat taking the home place and Walter Ross taking over the Milk River spread.  In 1905-1906 Walter Ross joined Ted Kenney and Doc Sheets in moving three thousand head of cattle from the Milk River Ridge to north of Gleichen, Alberta.  In 1908, Walter Ross sold out to Ted Kenney, and in 1909 formed a partnership with Jim Wallace, thus forming the Ross-Wallace spread, using the ‘hat’ brand on the left thigh and the 7Ubar.  They ran their cattle on leased CPR lands east of Lethbridge.

In 1912, the outfit obtained seven townships in the southwest corner of Saskatchewan and moved their headquarters down there. The Rosses still owned the Brown ranch on the Milk River Ridge and half interest in the Wallace and Ross ranch.  Every fall Wallace and Ross would ship between two thousand and twenty-five hundred big steers to the Chicago market.

During the years 1914-1918, the Wallace and Ross outfit bought the Cross Z from Add Day, the “Q” ranch from J.J.Bowlen, who had previously bought the outfit from Tony Day, and the Spencer Ranch from Billy Taylor.  When Iliff Wallace and George Ross – sons of the owners, began to participate they had a range west into Alberta of forty-two miles and eighteen miles into Saskatchewan, and it was between twelve and fourteen miles wide. George Ross Sr. returned from overseas in 1919, and in 1920 bought the Milk River Ranch just west of the Wallace and Ross spread.  The Wallace boys ran their outfit for a year or two and then turned it over to the bank.  George Ross took over from them.  He pulled out of Saskatchewan and bought the Deer Creek Cattle Co., west of the Milk River Ranch.  In 1926, they couldn’t beat the ever increasing interest at the bank so they sold their cattle, except for the wet cows.  Then George sold the “Q”, the Blacktail, Cross Z and the Lower Spencer ranches to the Gilchrist Brothers, and the Upper Spencer ranch to Mack Higdon (this is now Pinhorn Grazing Association Lease)

In 1949 George Ross Sr. and his sons George Jr. and Jack, together with Neil McQueen and Art Mewburn purchased a total of one hundred sixty-seven thousand acres consisting of seven townships of the Gilchrist Ranch, which includes the Cross Z, the Lower Spencer and the old Stark place, which is about thirty thousand acres that the Gilchrists got from Higdon, also the Whitney place.  The headquarters of this outfit was Lost River Ranches Ltd., using the hat brand on the left thigh.  The president of the company was George Ross Jr.

Some years later the Rosses acquired the old James Mitchell Ranch on the south slope of the Cypress Hills.  At the time they operated on eleven and a half townships and ran between five and six thousand head of cattle.  George Jr. continued to operate the Lost River Company as president and Jack Ross as secretary.  The Rosses bought out oilmen, Neil McQueen and Arthur Mewburn in about 1954.  A son, George Graham III, was born in August, 1955.  The “Flying Cowboy”, George Sr., passed away at the Lost River Ranch at branding time, June 1956. In 1959 the government took back thirty-four thousand one hundred and sixty acres of lease land to the north of ranch headquarters and formed the Nemiscam Community Pasture.  George managed the Lost River and the James Mitchell place (now known as the Flying R Ranches), until his untimely death January 5, 1971.  He was forty-eight years of age at the time of his passing.  He had become a noted author by writing articles in the “Winnipeg Free Press Weekly”.  After the death of Eileen Ross in January, 1975, the ranch was split again.  This time the government took land to form the Sage Creek Grazing Reserve.

The Lost Rover Ranch was sold to Leonard and Mary Jane Piotrowski in 1978.  Leonard had managed the Lost River since George’s death in 1971.  Leonard and Mary Jane have two children, Timothy Ross and Susan Marie.  The whole family is interested in ranching and rodeo.  They carry on a cow-calf operation and also lease some rodeo stock.  The Flying R Ranch was sold to Graham Ross and his wife Marilyn in November, 1978.