Earl Nash was born on a small farm in Massachusetts in 1883. His father passed away when Earl was 14 and he and his family moved to Clear Creek, Montana, in the Bear Paw Mountains.

The family, consisting of Mrs. Nash, Earl, Winifred (Winnie) and Kate (Kit), lived with their uncle for 4 years. The uncle decided that there was not enough room to expand the ranch where they were living and decided to move everyone to Canada. 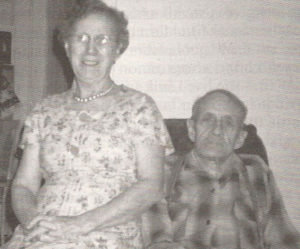 Earl & Ruth Nash / Photo Our Side of the Hills history book

They began their move in May of 1902 with 20 head of horses and two four-horse wagons loaded with settler effects, plus one cat who had a batch of kittens on the way.
From Havre, Montana, they followed a trail to the US-Canadian border until they came to Lodge Creek now known as Willow Creek. They crossed west of Altawan and then proceeded to follow the creek to Medicine Lodge NWMP barracks and on into Medicine Hat. The horses all had to be inspected by a vet before Nashes could become Canadian settlers. There was a delay seeing the vet so they decided to go back to Medicine Lodge and hopefully catch him there. They were unable to see him until May 24, 1902. It was very slow, moving the horses from the Montana ranges, because although they looked in good shape they would jigger if crowded and some would die. Due to the delay with the vet, food became a problem and they were down to bacon and syrup until they came to a ranch where they were able to obtain enough supplies to get them through.

They finally reached their destination on Battle Creek, about five miles southwest of the present site of Consul. It is thought that they were the first white settlers south of the Cypress Hills and that Mrs. Nash was the first white woman.

The first order of business was to build a shack to live in. Lumber was brought from Chester, Montana, because it was ten miles closer than Maple Creek and it was much easier traveling.

There was no mail delivery. Their mail was addressed to Coulee P.O., Assiniboia, NWT via Maple Creek. The NWMP would pick the mail up at Coulee Post Office and take it to the barracks where Gaffs would pick it up. This made it a 16-mile ride instead of 40 miles to get the mail. A post office was later established closer to home.

The uncle became ill and he sold all his cattle in 1906 thus missing the terrible winter of 1906-1907. He left his line of equipment for Earl, but sold his land to Ed Thomas. In 1910 the land was sub-divided and Earl moved four miles down Battle Creek which became his permanent home until 1940. The land was sold to Art Rotnem in 1940, and Nashes moved to Eastend and then to Enderby, B.C.

Earl married Ruth Baker in 1920, a graduate of McMaster University who came west to teach at Sunshine Valley School. They had one son, Gordon, born in 1923.

Nashes were very active in the church and community. Mr. Nash was one of the organizers of the Saskatchewan Grain Growers as well as the local Wheat Pool. He also helped organize the Nashlyn Livestock Co-operative Association in 1922.